The beginning of our journey at Mezzacello was really just the hunt for a house in the Old Towne East area of Columbus. Jim and I were living in an apartment close to Old Towne East and were looking for a house in the district. At the time, houses were selling as fast as the “For Sale” signs were going up – and still are. Nightly we were walking or driving through the community watching for a good house.

Now everyone has their own taste and the things I will say next are going to incite some and excite others. I don’t think Jim had as narrow taste as I did, but I was looking for as early a house as possible in our price range. I’m not particularly fond of over ornate Victorian houses. I appreciate the design and work that others did on their homes, I just didn’t want all the gingerbread for myself. I had made a offer on a Romanesque house in the neighborhood but wasn’t excited about it (they just look perpetually surprised or angry to me with those heavy brows over the windows). 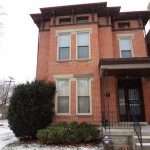 I was working downtown and walking home when I got a phone call. I couldn’t hear because of the noise of traffic on East Broad St and so turned down a side street to get a little quiet. The first house on the left had a for sale sign. It was Italianate. AND there were empty, southern-facing lots beside it. Perfect! I immediately took pics and texted Jim. There were lots of exclamation points!!! As soon as Jim came home I rushed him over to see what he thought. It was a long narrow house that needed some work, but looked perfect for what we needed. I called the number on the sign and left a message.

I couldn’t wait for the call back from the realtor. It was hard not to be excited. When she called though, the house was in contract. I told her to call me if the contract didn’t go through. And then we waited. Time passed and the for sale sign didn’t go down, but I hadn’t heard from the realtor. I called and asked what was going on and she said they had gotten an extension, but if the contract didn’t go through, she would call me. Again I waited and wondered if it was wrong to hope the buyer couldn’t buy the house. I didn’t want to hope but still thought it was a perfect house for what we needed. Meanwhile we halfheartedly kept looking. Time passed and the for sale sign still stood and I didn’t get a call. I called and said I would still be really really interested if their contract just couldn’t go through. She said if I made an offer the family would probably take it. Done.

Long story short we ended up with a house that I loving called a flounder; All it’s eyes were on one side looking out on the empty lots. The lots were over grown but I didn’t care. I was ready to start hacking away clearing the the wilderness that had taken over the lots. No one had lived on the property for years and so everything was unkept. I got poison ivy on the first visit…a really BAD case of poison ivy. It was everywhere. I would try to protect myself, but even with long pants and long sleeve shirts, I would erupt in break outs of poison ivy three or four more times before we had some control of the property.

Transforming and Taming an Urban Wilderness 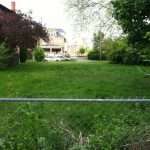 The lots and the house had a forlorn, abandoned air about them, but the house was proud. The two adjacent lots along the southern edge of the house were a mess. There were 9-10 silver maples that had been tortured by AEP because of power lines, They needed to be cut down. There was a forest of Japanese honeysuckle and Rose of Sharon that had formed an urban briar. Virginia creeper, English ivy, trumpet vine were rampant along with the dreaded poison ivy grew everywhere along the perimeter of the property. It was so thick that the homeless and addicts were either living or partying in the overgrowth. I sometimes joke — but am secretly serious — that I have to garden with Kevlar gloves. Glass and needles were strewn everywhere. Still there was vision.

Once the overgrowth was cleared we could see there was a wrought iron fence down the front of the property and a chain link fence with an open gateway (the gates were missing) that ran down the back alley. To the south side the yard was open. The first thing to happen once we got it cleared was to decide what to do with that opening to the alley along the southern perimeter. People were using the lot as a dog park, but not cleaning up afterward, and a neighbor was driving through the property with a 4-wheel truck cutting the grass and leaving ruts. We knew we had to close it off, but with what? We decided to run the chain link down the side from the same in the back. Wrought iron would be too expensive to afford with all the projects we we’d be starting all at once. It was the first step after getting in; Getting control.

So the first lesson in urban gardening is to keep your vision and learn tenacity. Just keep going and don’t give up. Commitment and patience have their rewards. To this day we are still fighting the bind weed and Canadian thistle (those darn corkscrew roots!) …but we’re in and getting control. The grand project began.

1 thought on “How We Discovered Mezzacello”